On this page, we present the results obtained during the test-phase of the data challenge (January 2020)

The feedbacks received from this test-phase were useful to improve the data challenge before setting the new deadline for the phase 1 to the 30th of September 2020.

Among the 51 participants who registered on CodaLab, we received 9 submissions. We publish here the results from the ADI sub-challenge (subchallenge_1/) on the VLT/SPHERE-IRDIS data taken with the K1 narrow-band filter (SPHERE_IRDIS_3/).

We warmly thanks the participants who have submitted their results for this first test-phase (note that the results submitted during the test-phase remain valid for the final phase 1).

We chose this dataset among the data for the data challenge, (presented on this page), because this is the most used SPHERE mode for exoplanet detection (e.g. for the SHINE large survey, Chauvin et al., 2017).

The observing conditions were not stable so the image cube shows large temporal variations.

In order to define the detection limit around which the synthetic planetary signals are injected, we ran a classic annular PCA from the VIP toolbox. The resulting detection map is shown in Fig. 2 and the F1-score obtained for this widely used speckle-subtraction technique is 0.45. 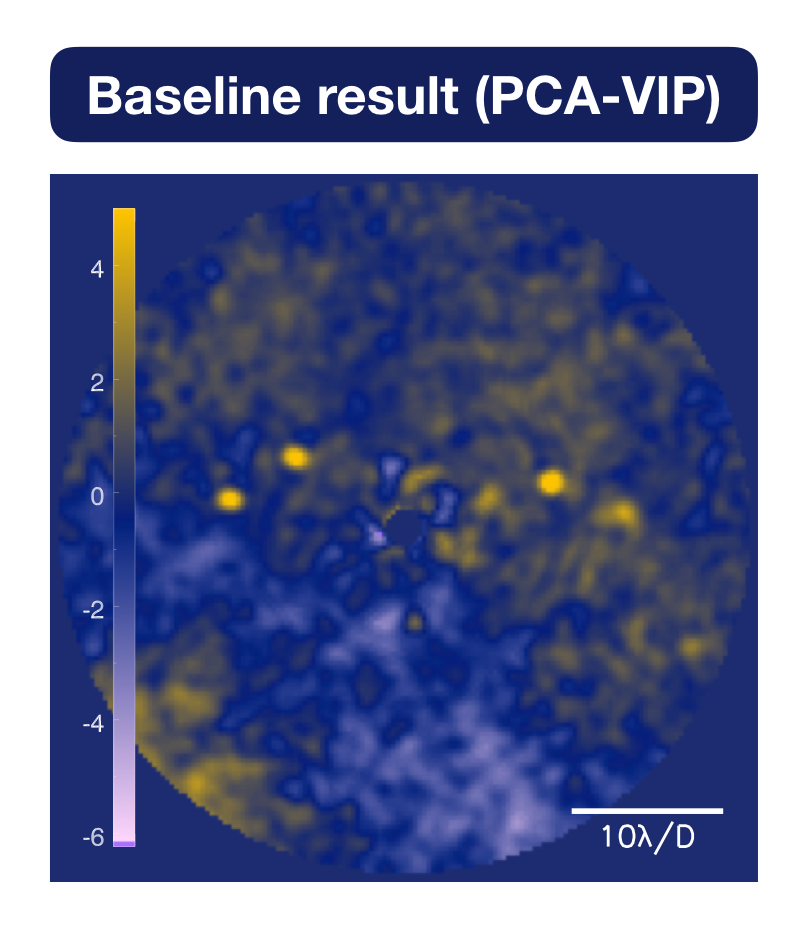 From the submissions on CodaLab, 6 are valid and the results are shown below.

The six detection maps are displayed from their minimum value to the participant provided threshold: every resel above this threshold is considered as a detection. The true positifs are encircled in dashed pale yellow.

The global F1-score (defined here, to be as close as possible to 1) is indicated below each detection map.

More information about each algorithm used can be find at the end of this page.

In terms of trade-off, FMMF is the most powerful technique to minimize the FPF while maximizing the TPF in order to detect the 5 injected signals above the participant-provided threshold (hence the larger F1-score).

5. Additional information about the algorithms used

We hope this page motivates you to participate too !